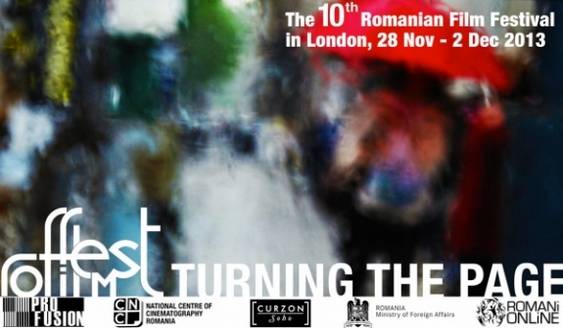 The ROMANIAN FILM FESTIVAL IN LONDON (RFF) features, every year, a glittering and stimulating array of titles at a leading London cinema.
“2013, the year of our 10 year anniversary, signals a moment of unique importance for the Romanian communities here in Britain, in Europe, and the rest of the world. Back in 2003 our task was to amplify the voice of the Romanian community in the English speaking capital, to create a focal point for contemporary Romanian culture, and to join forces with the network of cultural exhibits in London. 10 years on, as an integral part of our community abroad, we now prepare to help build the cultural infrastructure of the rapidly growing diaspora.” (Ramona Mitrica, Festival Director)

The RFF took off in 2003. The Romanian New Wave cinema was about to take off at the same time, highlighting remarkable actors and young directors. Supported and inspired by these sparkling new talents, the Festival went from strength to strength. For example, in Britain, we were the first to screen the short films and the debut feature of the prizewinning director Cristian Mungiu, who went on to forge an international reputation, and remains a friend and supporter of the event. In the ensuing years a long list of actors and directors have shown their work at the RFF, then developed into household names. At the same time the Festival has continued to celebrate the classic Romanian cinema, acquainting British audiences with the best in our tradition. In 2004, for example, the highlight of the festival was the Lucian Pintilie Retrospective, which featured a stimulating appearance by the director.

As a result, the Festival has always been an important means of transmitting a positive message about Romania, and the rest of the East and Central European region. In contrast to routine media coverage, the films being screened are among the few positive contributions to images of life in the region. Ironically, the New Wave directors have been among the most acute and perceptive critics of Romania’s post revolutionary society, but this has been far from promoting a negative image of the country. Instead, in London, Berlin, Cannes and New York, their films have been recognised as a challenge to stereotypes, offering audiences a detailed understanding of Romanians as individuals like themselves.

Its history and successful track record make the Romanian Film Festival in London one of the major Romanian cultural events of the year in Britain. The RFF began in 2003 in a modest way at a small art-house cinema in Central London, and has grown steadily to present a wide spectrum of Romanian-language cinema, from major hits to cutting edge new directors and retrospectives. RFF aims to reach an important audience eager to celebrate Romanian achievements.

It is a celebration of Romania and its spirit, which is supported both by the UK-Romanian community, and various British and Romanian organisations.
RFF is a not-for-profit enterprise, functioning with the help of grants and sponsorship from our numerous friends and supporters.

The Romanian Film Festival in London is organised by Profusion International Creative Consultancy, in partnership with The National Centre of Cinematography in Romania and Curzon Cinemas in London. Supported by The Department for Romanians Abroad (DPRRP), ROMANi-ONLiNE.co.uk, EBRD (European Bank for Reconstruction and Development), Embassy of Romania to the UK