A testament to the country’s turbulent history, Romania’s great castles mostly date from the 12th to 15th centuries AD. It was a period of great instability and insecurity. Wealthy territorial states, particularly those in the isolated mountainous areas, started to form allegiances with neighbours to defend themselves and affluent regional power bases, like Wallachia and Bukovina, developed. These were regions with good cause to feel insecure. They had seen centuries of conflict dating back to the times of the Dacians and the Romans, and continuing courtesy of the Goths and the Huns, the Ottomans, the Mongols, kingdoms from Poland to Moldavia and a host of notoriously cruel rulers.

This is a guide to the top ten Romania castles — the most impressive fortifications in the country.

This huge, turreted Gothic castle is former home of the 14th century ruler of Transylvania, Iancu de Hunadoara. It’s southeastern Transylvania’s greatest castle. Corvinesti is also one of the best examples of medieval military might in Romania, and contains an ethnographic and archaeological museum. The castle is also known as Hunedoara or Hunyad Castle.

Intriguing Rasnov Fortress was built by the teutonic knights as a strategic refuge on the trade route between Transylvania and Wallachia. It comprises a school, a chapel and some thirty houses among its buildings. Rasnov fulfils plenty of fortress fantasies: here are buried skeletons and secret passages to occupy visitors. Surrounded by sheer cliffs, the fortress was invaded only once, when attackers discovered the secret route residents used to bring in water. After this an impressive 143 metre well was dug to prevent a repeat attack. Rasnov town is nine miles from Brasov.

When the original fortress was burned in 1240, those charged with rebuilding Fagaras constructed one of the greatest defensive Romanian castles, surrounding it with a deep moat that could be filled from a nearby stream. As a testimony to its design, Fagaras was used as a political prison well into the 20th century. A museum contains displays on Romanian handicrafts and medieval weapons. Fagaras town, 45 miles from Brasov, has a train station.

Building at Bran Castle began in 1377, and whilst this six century old white-walled fortress has had a colourful history, no evidence linking it with Vlad Tepes (the Wallachian ruler on whom the Dracula legend is based) exists. The hype most probably dates from rumours surrounding the cruelty of past castle owners. Bran Castle website has detailed information on the building and its history.
Poenari Castle—Family Home of Vlad Tepes

Dracula devotees hold Poenari to be the real Dracula’s castle. Along with Bran Castle, it’s a must on any vampire tour of Transylvania. 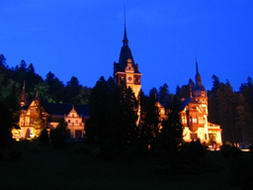 King Carol I commissioned construction of 160 room Peles Castle in 1873, and until 1947 it remained the summer residence of the Romanian royal family. Located in the picture-postcard mountain town of Sinaia south of Brasov, Peles is one of the most popular fortresses to visit in Romania due to the stunning collection of European art, and a fascinating interior that boasts leather-covered walls and frescoes designed by Gustav Klimpt.

Coltesti is a ruin, but it is one of the most photogenic castle ruins in Romania, perched on top of a steep limestone rift in the Trascau Mountains south of Cluj, and datnig from the early 13th century. It’s an atmospheric place with an off-the-beaten-track location.

The teutonic knights built this, the largest fortified church in southeastern Europe, in 1212. The 15 foot walls are said to have been attacked fifty times during its history, but were breached just once.

This beautiful, UNESCO-listed medieval town is Europe’s most well-preserved inhabited citadel, and birthplace to Vlad Tepes (there is a statue to the ruler on the main square).

Another vast, spectacular fortified church, Biertan boasts one of Romania’s most beautiful altars, protected by immense 35-foot high walls.
The UNESCO World Heritage status of many of the castles here may be indicative of their importance, but with Romania’s castles it is all about atmosphere. Standing on the ramparts of any of these fortresses looking out at the remote Romanian mountains, it is possible to utterly forget which century one is in.