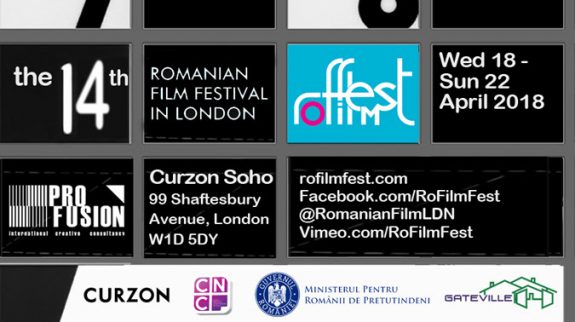 Dear film lovers & friends,
We would like to invite you to the 14th Romanian Film Festival: Vanishing Hearts, which will take place at Curzon Soho, between 18–22 April 2018.

The Romanian Film Festival (RFF14) is back once again, bringing you new releases, rare classics, talented artists, and important debates with film experts and critics, from Romania to the UK. Special events and conversations accompany the screenings, continuing the tradition of the festival as a joyful celebration of Romanian cinema. Award-winning filmmakers and actors will join the festival to enter into a dialogue with their audiences.

The title Vanishing Hearts encapsulates the many-layered themes of RFF14. In the opening film, Pororoca, a young girl vanishes, forcing her father into a series of escalating crises. The festival ends with Charleston, where two men who loved the same woman, meet in the aftermath of her funeral. In between these two are Breaking News, Ana,Mon Amour and Marita, movies which pick up and play with the various passionate levels of meaning expressed by the phrase „vanishing hearts”. Typical of the New Romanian cinema, however, is the way that each of these stories finds its context in the continuing turmoil of Romanian society, where modernity struggles with tradition, and where history slips in and out of the narrative, like a dangerous and unreliable undercurrent. In a sense the RFF14 films look back and survey the elements which have been vanishing from the culture of the region in recent years, but, at the same time, they locate an underlying mood of love and trust which might well furnish replacements.

Its history and successful track record makes RFF14 one of the major Romanian cultural events of the year in Britain. For many, this will be an opportunity to encounter a cinema which addresses itself to the history and conditions of a specific audience, while at the same time tackling themes which are universal, and which explore the emotions and experience of an international public. On the other hand, during this period of challenge to the issue of cultural understanding across Europe, your continuing interest will prove priceless in the promotion of Romanian culture throughout the continent and in Britain.

Thanks for your support, and see you on the red carpet!
Ramona Mitrica & Mike Phillips
Profusion Directors

Thursday 19 April 2018; 6.30pm
BREAKING NEWS
UK premiere. Screening followed by Q&A with producer Bogdan Craciun
About parenthood and father figures, fabricated stories and the deep layers that hide below the surface… A psychological journey of redemption for a famous news reporter.
(d: Iulia Rugina | 2017 | 1h 35min | Drama | Romania)
Stars: Andi Vasluianu, Voica Oltean, Ioana Flora, Oxana Moravec
“Breaking News” does not give verdicts, it asks questions that should linger in the viewer’s mind at the end of it. What would a stranger make of what’s left behind when we’re gone?
Trailer: https://vimeo.com/rofilmfest/breakingnews
Tickets: https://www.curzoncinemas.com/rff/romanian-film-festival-breaking-news

Sunday 22 April 2018; 3.00pm
CHARLESTON
UK premiere. Screening followed by Q&A with director Andrei Cretulescu and producer Codruta Cretulescu
A bizarre love triangle between two men and the woman they both lost. Love and sorrow go hand-in-hand.
(d: Andrei Cretulescu | 2017 | 1h 59min | Black Comedy, Drama | Romania)
Stars: Serban Pavlu, Radu Iacoban, Victor Rebengiuc, Dorian Boguță, Andreea Vasile
The film’s versatility may be its biggest strength and probably its most appealing feature for the audience: some viewers may prefer the dramatic moments, while others will be more open to the comedy, wondering, as the curtains close, whether the film is a drama or a black comedy.
Trailer: https://vimeo.com/rofilmfest/charleston
Tickets: https://www.curzoncinemas.com/rff/romanian-film-festival-charleston

———-
Organised by Profusion (www.profusion.org.uk)
In partnership with Curzon Cinemas and The Romanian National Centre of Cinematography (CNC).
Supported by The Ministry for Romanians Abroad (MpRP).
Sponsored by GATEVILLE.
RFF is a not-for-profit enterprise, functioning with the help of grants and sponsorship from friends and supporters.
RFF Facebook event page: https://www.facebook.com/events/381464202325722/
———-
All films are in Romanian with English subtitles.
All screenings take place at Curzon Soho (99 Shaftesbury Avenue, London W1D 5DY. Nearest tube: Leicester Square; Piccadilly Circus). Located in the vibrant heart of Soho, Curzon Soho is a landmark cinema which was awarded the BAFTA for Outstanding British Contribution to Cinema In 2017.