Showcase: Romania, Still Beneath a Cloud
By NADIA SUSSMAN

Cristian Movila was 7 years old when a firing squad executed the Romanian dictator Nicolae Ceausescu and his wife, Elena, on Christmas Day in 1989, ending more than 40 years of Communist rule.

On the 20th anniversary of the Romanian revolution, Mr. Movila, 27, offers a portrait of his country — a land of winter, Orthodox faith, class divide and industrial decay.

For most Romanians, Mr. Movila said, the economic promise of the revolution has proven hollow. Industrial work, where it continues at all, uses Communist-era technology, he said. Many factories have been abandoned. There is hardly a middle class, leaving masses of poor people in the countryside.
DESCRIPTIONCristian Movila An abandoned factory. 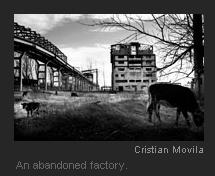 Mr. Movila’s rural subjects are often faceless; silhouetted against a blanched snowscape, obscured by a train window or dwarfed by Eastern Orthodox icons. He tells the story of Romania as much through what is absent — young men, modern industry, summer, color — as through what is there.

“In deep Romania, it’s cold,” Mr. Movila said. “It’s winter. People don’t have food on the table and the crisis is really, really big.“The feeling is really deep and black and a little bit death. This is the feeling of my Romania.”
More about this on nytimes.com