The exhibition has been organized by the Institute for the Study of the Ancient World at New York University in collaboration with the National History Museum of Romania, Bucharest, and with the participation of the Varna Regional Museum of History, Bulgaria and the National Museum of Archaeology and History of Moldova, Chişinău; and has been made possible by the Leon Levy Foundation. Public Programming has been supported by the Tianaderrah Foundation and organized in conjunction with the Romanian Cultural Institute, New York. 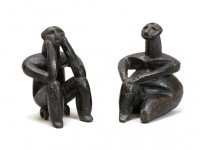 In 4500 BC, before the invention of writing and before the first cities of Mesopotamia and Egypt were established, Old Europe was among the most sophisticated and technologically advanced regions in the world. The phrase “Old Europe” refers to a cycle of related cultures that thrived in southeastern Europe during the fifth and fourth millennia BC. The heart of Old Europe was centered in the Danube River’s fertile valleys, where agriculturally rich plains were exploited by Neolithic farmers who founded long-lasting settlements—some of which grew to substantial size, with populations reaching upward of 10,000 people. Today, the intriguing and enigmatic remains of these highly developed cultures can be found at sites that extend from modern-day Serbia to Ukraine. The Lost World of Old Europe: The Danube Valley, 5000–3500 BC presents extraordinary finds from the three countries with the richest Old European archaeological heritage—Bulgaria, the Republic of Moldova, and Romania.

While Old Europe can be defined geographically with relative simplicity, the identification of cultural groups who lived there is more complicated. Since these cultures did not leave behind any written sources, the material remains from excavated settlements are the only tools that scholars can use to reveal both localized and common customs. Archaeological exploration began throughout the region at the end of the nineteenth century, but systematic excavations did not commence until the 1930s. During these formative years, when a common Old European culture had not yet been identified, archaeologists began classifying individual cultural groups based upon the site where each was first recognized. Hence, the Cucuteni culture is named after the modern Romanian village of Cucuteni, where the first remains from this culture were excavated. The same is true for the lower-Danube sites of Gumelnita and Hamangia, and Varna in Bulgaria, all highlighted in this exhibition.

Bucharest, Nov 13 /Agerpres/ – Five anthropomorphic statues made of bone, belonging to the patrimony of the Teleorman County Museum based in the southern city of Alexandria, thought to represent the Gumelnita culture, will made the object of an international exhibition titled ‘The Lost World of the Old Europe. The Danube Valley 5000-3500 B.C’.

The Teleorman museum’s spokeswoman Corina Iordan on Friday told Agerpres that the exhibition was organized by the American Institute for the Study of the Old World and was to bring together a wide range of objects belonging to several museums in Romania, Bulgaria and the Republic of Moldova.

According to the abovesaid source, there would be exhibited to be admired a series of ‘Goddesses’ made of bone and clay, jewelry, weapons and pottery.

Archaeologists discovered the objects during many years in such archeological sites generically cold ‘Old Europe’, referring, more precisely, to such old cultures representing the eneolithical era, which appeared and developed in the southeastern side of the now European continent in the 5th millennium before Christ.

The centre of ‘the Old Europe’ was located on the Low Danube Valley, on the territory of the northern Bulgaria and the southern Romania today.

The Gumelnita statues belonging to the Teleorman County Museum, which are now included in the category treasure of the national cultural patrimony, were found following the digging at localities and necropolises in the Vitanesti area.
More information on roumanie.com