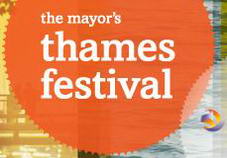 For the third consecutive year, Romania takes part in The Mayor’s Thames Festival, with a traditional stand and a series of live acts organised by the Romanian Cultural Institute in London.

The stand is part of the New European Village section, which highlights cultures from Central and Eastern European countries with rich heritages, defined by centuries of traditions. Romania will present traditional crafts such as embroidery, weaving and live loom demonstrations. The guides of the event are Niculina Andronache, Elena Vaculisteanu and Steliana Baltuta from the Ethnographic Museum in Botosani, who will weave and talk about popular costumes, textiles and embroidery.

Fanfara din Vorona (northern Moldavia) will deliver two live-performances each day of the festival, part of The Bandstand section, featuring some of the world’s best street music. The Fanfare is one of the most popular rural brass bands from Romania, with a strongly original and powerful music. Throughout the Festival the Fanfare will be on parade wearing Romanian folk costumes. They will also play at the Night Carnival, when you are invited to join the famous Romanian round dance Hora moldoveneasca.

Romania’s participation in the Festival is a partnership with the Ethnographic Museum and the County Council of Botosani.

The New European Village highlights cultures from countries with rich heritages, defined by centuries of traditions.  This year, Romania, Hungary and Poland will be presenting such traditional folk crafts as embroidery, weaving, pottery, basket-weaving and wood-carving.