Rich with history, high in Transylvania

BRASOV, Romania – Thick morning fog was lifting from Council Square, slowly dissipating as the sun pressed above the rim of the nearby mountains and pastel buildings glowed in the brightening light. At that moment, as the cool air carried a scent of burning from distant fields, it struck me that I was quite far from familiar things and that I loved being in Brasov.

I had arrived the night before, after a hundred-mile train ride from the capital, Bucharest, along a route that meandered through the lush Prahova Valley before climbing into the southern Carpathian Mountains that rim Brasov like a crown. I wanted nothing but to wander the streets, admiring the mix of Gothic, Baroque, renaissance, and romantic period buildings in the center, and possibly to sit at an outdoor cafe, drinking espresso. And that’s just what I did. 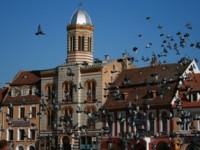 Brasov has been a cultural and commercial center of Transylvania since as early as the 13th century. Its location between the Ottoman Empire and Western Europe made it a trade route hub. The original medieval settlement, founded by the Teutonic Knights in 1211 and settled by the Saxons, has been preserved and restored, drawing historians and tourists to the old city where there’s plenty to do and see.

A good place to begin a walking tour is Council Square, also referred to as the Marktplatz, a wide and active central plaza that’s said to be where the legendary Pied Piper led the entranced children of Hamlin. I didn’t hear any pipers, though the influence of the Saxons is everywhere you look, from ornate churches to the colorful facades of three- and four-story buildings trimmed and decorated like fanciful cakes.

The Black Church, said to be the largest Gothic church between Vienna and Istanbul, is on the southwest corner of the square. Contrary to the image the name conjures, the church is not black. It was given this moniker in 1689, after a fire destroyed much of the town and blackened the church’s interior walls. Although the exterior retains its Gothic character, the lofty, light-filled interior restoration is mainly Baroque, with stained glass windows, stone columns, balconies, an elaborate 4,000-pipe organ, and walls adorned with 17th- and 18th-century Anatolian carpets. Only one of two original towers was rebuilt and it houses the largest church bell in Romania, a seven-ton marvel.