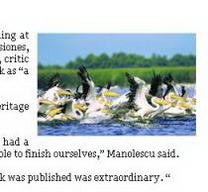 A volume collection entitled “World Heritage in Romania” was launched on Tuesday evening at the Kretzulescu Palace. Published under UNESCO and Spanish publisher ARTEC Impresiones, the book was also issued with help from the Romanian Cultural Institute. At the launch, critic Nicolae Manolescu, permanent UNESCO ambassador was present. He appreciated the work as “a monumental book.”

The seven volumes in the collection include photos and information on all of Romania’s heritage sites, included in the international UNESCO circuit.

The collection was launched simultaneously in Romania and Spain. “I am happy we have had a helping hand from our Spanish friends in finishing this monumental project we were unable to finish ourselves,” Manolescu said.

Spain’s ambassador, HE Estanislao de Grandes Pasqual said “the very fact that such a work was published was extraordinary.“

”I am happy this was an event takes place in Spain as well, a country that is currently holding EC presidency,” he said.

The ambassador also appreciated the fact that “Romania has immense possibility as far as heritage. The churches, the monuments, nature itself represent inestimable riches for your country.”