Gates will open on the 18th at precisely 11:11 am. The festival itself will start the following day, on the 19th in the Ambient Forest with an opening ceremony, performances and World Music.

The Mystical Forest Stage will run continuously until the end of the festival with a variety of sounds from World Music, Downbeat, Upbeat, Dub, Ambient and Experimental sounds provided by international Bands, Live acts and DJ´s.

The first 2 days (19th & 20th) of the festival will be focused on conferences, workshops, games, movies, and social and cultural interaction between the Tribes.

In total there will be 4 days and 4 nights (20th – 24th) of music on the Main/Dance stage with a flowing musical journey throughout the world of intelligent electronic music.

At sunset on the following day, August 25, the gates will be closed.

More about Transylvania Calling festival on the official website.

„This year Transylvania Calling has decided to take a refreshing turn in our collective path to boldly go where no one has gone before…or rather where many has gone before, but it was quite some time since we did so. 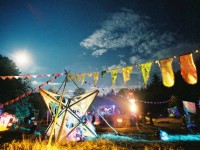 Circumstances and experiences from our past tribal gatherings in the beautiful mountains and natural forests of the Transylvania region of Romania has taught us what really matters and also what does not matter so much for the essence of the experience that we desire to create in this years gathering. The focus this year will not lie on us trying to follow the main stream festival trends – i.e. to attract a huge audience by sporting a lineup that contains as many high-profile acts as possible, and leaving culture and community as something of a backwater.

We have chosen to bypass the financial politics of psy trance business and instead focus on what should really matter most  – Us! The recognition and alignment with collective culture and our emerging global (sub)continent of  unity-consciousness is what we find most important, not that we can proudly present the hottest names in trance!”

Location: Gura Raului
„Only 17 km from Sibiu, Transylvania’s natural and cultural heart centre, Gura Raului – old Romanian settlement – is situated on the Valley of Cibin, at the bottom of Cindrel Mountains, about 600m altitude. It is a beautiful remote place, in the middle of ancestral forests, old rooted trees that will keep secret the magic of the gathering,whispering it only to the wind.”

Once Upon a Time (Bulgaria)

This is the play and chill ground. It’s open for 7 days and 7 nights. Leading by chill out, ambient, world music and tribal rythms to load up your soul and spirit.

Matt With an S – SunshineTribe (Sweden)

Taruna dj set – ShivaSpaceTech (Bali)
thanks to all artists for the support!

Mainstage Line Up is full!!! Final line up to be announced with Timetable in July!!