Trail of the unexpected: Easter in Transylvania 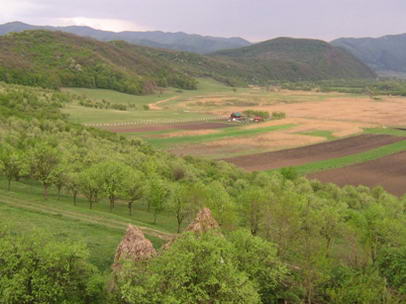 ‘Hristos a inviat!”, exclaimed the buffalo farmer, by way of greeting her customers. The phrase translates from Romanian as „Christ is risen!”. The recipient knows to respond „Adevarat c-a inviat!” („He is risen indeed!”). This turned out to be the usual exchange across Transylvania in the week following Easter – and, in rural areas, for up to 40 days after Easter Sunday. Romania may have endured one of the nastiest of the Communist dictatorships, but even in the most difficult days of the Ceausescu regime the population clung to a centuries-old mix of pagan and Christian traditions. Easter was – and is – the highlight of the Christian year.

I arrived in Transylvania on Good Friday, alas too late for Thursday’s ritual of dyeing eggs in onion skins and decorating them with beeswax, leaves and symbolic motifs, but in time to hear another tradition. As we drove along the main Arad-Bucharest road, which passes through numerous villages, an unusual sound was audible from churchyards – the toaca, wooden sticks being beaten together to mark a special occasion.

Transylvania is a corner of Europe whose rural areas have been largely overlooked by so-called progress. The landscapes specialise in enchantment: rolling hills of deep green, punctuated by farmhouses and cottages that look positively medieval – a sense emphasised by the use of livestock rather than motor vehicles to work the land.