William Blacker in Romania
Transylvania’s fairytale villages are as pretty as a Christmas card – the perfect setting for a snowy sleigh ride with Santa
Lying in valleys between deep oak and beech forests, and dominated by vast castle-like churches which tower above the terracotta roofs of the houses that cluster around their walls, the Saxon villages of Transylvania have a fairytale quality about them. From the church bastions, looking south over the forest, on clear days you can see the ragged, snow-covered ridge of the Carpathian mountains. This time last year, in one of these Saxon villages, not far from the medieval town of Sighisoara, a small Gypsy boy was waiting for me at Christmas.

The Saxon lands stretch over a large part of Central 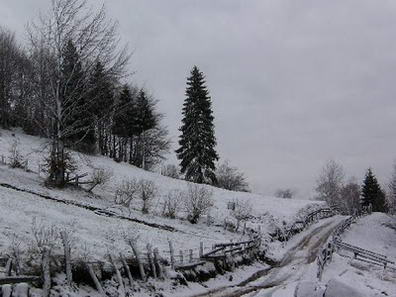 Romania, and are so called because of the northern European immigrants who settled here in the 12th century. For over 800 years they stayed, but then, after the collapse of the Ceausescu regime when the borders opened, the descendants of the original settlers packed their bags en masse and departed for Germany. Within a year, villages once populated by several hundred Saxons were largely abandoned, and before long the Gypsies had taken their place. Now, instead of Germanic orderliness there is a degree of mayhem, and with it splendid rabbles of happy Gypsy children rushing about and playing in the village squares. One of these children is my five-year-old son, Constantin.