Romanian-born soprano Leontina Vaduva has received the title of Officier des Arts et des lettres for her exceptionally musical career and for promoting the French music all over the world. 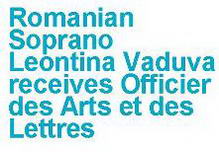 Leontina Vaduva studied at the Conservatory of her native Bucharest and has acquired an international renown as one of the leading interpreters of the Italian and French repertoires in only a few years. After winning several awards at competitions such as the Francisco Vinas in Barcelona and the S’Hertogenbosch Competition in the Netherlands, she made her debut in the title role of Massenet’s “Manon” at the Théâtre du Capitole in Toulouse.