Horia Colibășanu, the Romanian climber who has summited eight of the 14 Himalayan 8,000ers, has given up this year’s ambitious expedition, intended to open a new route to the peak of Dhaulagiri (8,167m), because of bad weather conditions, which would have put him and his team in grave danger. 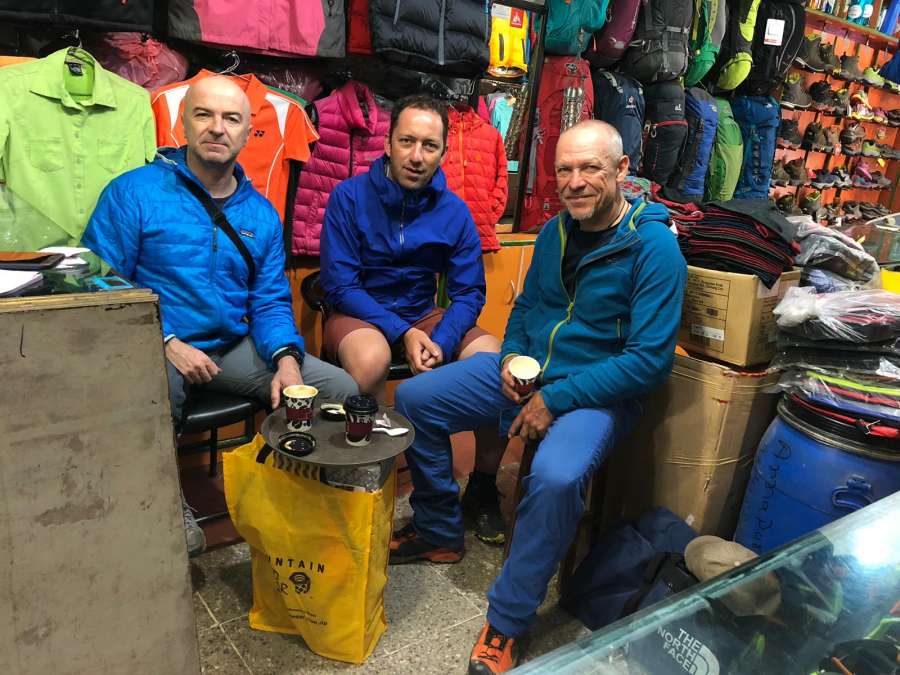 Colibășanu, together with Marius Gane and Peter Hamor, had planned for this year’s spring to climb the north-west ridge of Mount Dhaulagiri on a new route, a project which would have had the significance of entering the Guinness Book of Records. Stationed in the Himalayas since the beginning of April, the three athletes managed to reach an altitude of 5,600 meters, but could continue no further, for lack of good weather, necessary for high altitude ascents.

We needed a break in the weather, winds no stronger than 30km/h in the summit area, for at least four days. We were going to ascend at a slow pace, as we had gear to carry and were not acclimatized for high altitude. This year, the good weather window failed to happen.  It seems that, just as in 2014, a weather disturbance in the northern hemisphere brought endless rains to Romania, floods to Slovakia and a lack of windows for ascents without supplemental oxygen in the Himalayas, said Horia Colibășanu.

However, the Timisoara-based athlete is optimistic regarding this alpine ascent project, should good weather conditions exist.

The bright side concerning this route is that we have overcome the most difficult part, a chimney and a very difficult and technical wall, an area with rocks falling off. We covered this stretch of the route countless times, as we had to equip it for climbing. Beyond it, at over 5,600 meters on the ridge, it was possible to walk. Next year, should we have good weather, with the route already partially equipped, our chances are much higher, added Colibășanu.

The Dhaulagiri expedition team was formed of Horia Colibășanu (42), Marius Gane (51) – Romanian professional sportsman and high altitude climber, and Peter Hámor (53) – the Slovakian mountaineer who has summited all 14 of the Himalayan 8,000ers. The three of them have performed an ascent without the use of supplemental oxygen, nor the assistance of Sherpas.

Further information on this year’s expedition is available on www.horiacolibasanuhimalaya.ro , as well as on Colibășanu’s Facebook and Twitter pages. The sportsman has spoken of this year’s experience, saying that he could not find comparisons for how tough it was.

2019 is the year of Colibășanu’s 21st international expedition, as well as his 16th expedition in the Himalayas.

This expedition is a project of the Alternative Sports Club from Timișoara (Romania), affiliated to the Romanian Mountaineering and Climbing Federation, which runs and monitors mountaineering projects included in the international sports calendar.

Horia Colibășanu is supported in this expedition by the following Gold Level Sponsors: Profi, FAN Courier, Comtim and Webasto.

Horia Colibășanu is a professional sportsman and high alttitude climber, already having under his belt successful summits on 8 of the 14 8,000ers in the world.

His successful expeditions in the Himalayas, as well as his principles of sports ethics regarding climbing without additional oxygen and without the assistance of Sherpas have made his fellow citizens greatly admire him and support him in his endeavors.

His sports results have also been appreciated by Romania’s President Mr. Klaus Iohannis, who in June 2017 granted Horia Colibășanu the highest distinction to be given by the President: “Romania’s Star” National Order, in rank of Knight.

Colibășanu’s most notable ascents have been accomplished on Annapurna, K2 and Dhaulagiri, three of the Top 5 deadliest mountains in the world according to The Economist (May 2013), quoting Eberhard Jurgalski, an authority in the field.

Horia has taken part in 21 international expeditions throughout his career (up to 2019), while teammate with climbers from various countries, such as Slovakia, Russia, Spain and Poland.

The tragically ended expedition of 2008 on Annapurna– when he lost his friend and rope mate, Iñaki Ochoa – was a turning point for Horia.

Elizabeth Hawley, the most thorough chronicler of Himalayan expeditions ever to have lived, recalled: “Horia put his own life in danger by staying [for 72 hours at over 7,400m altitude]with his sick teammate, Iñaki Ochoa, while he himself had become gravely ill because of the high altitude they were at.”

Horia sounded the alarm at base camp, and some of the best mountaineers in the world set out to save Iñaki. Annapurna 2008 was the most complex rescue operation in the history of the Himalayas.

The climbers who risked their lives for Iñaki, including Horia Colibășanu, have been awarded various distinctions:

Horia Colibășanu is the only Romanian climber to receive the “Spirit of Mountaineering” commendation from the British Alpine Club, the first and most prestigious mountaineering club in the world.