An Italian court has dismissed a request from MP Alessandra Mussolini to ban a Romanian movie from being screened in Italian cinemas.

She claimed it had insulted her.

A court in Rome decided to deny the request of the granddaughter of fascist dictator Benito Mussolini, saying the context removed all offensive meaning of the insulting phrase the MP had referred to.

The movie „Francesca” directed by Bobby Paunescu is to be screened in Italy starting on 27 November.

In the movie, highly applauded after initial screening at the Venice International Film Festival, a character says: „Have you heard that whore Mussolini wants all Romanians dead?”

Verona Major Flavio Tosi also claimed his reputation could suffer, as one character says in the movie „they (the Italians) have declared Verona free of Romanians”.

Director Paunescu told Mediafax the situation was „delicate.” He said that neither Mussolini nor Tosi had seen the movie. 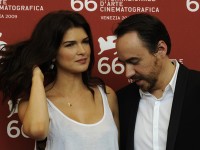