Mercedes-Benz Models Receive Three Awards, More than Any Other Automaker

MUNICH: 17 June 2011 — Satisfaction among owners of two-year-old vehicles in Germany has declined from 2010, as has industry-wide performance in vehicle quality and reliability, vehicle appeal and service satisfaction, according to the J.D. Power and Associates 2011 Germany Vehicle Ownership Satisfaction Study SM (VOSS) released today in association with AUTO TEST.

The study is based on more than 17,000 owner evaluations of their vehicles and dealers across 67 attributes grouped in four measurements of satisfaction. In order of importance, they are: vehicle appeal (32%), which includes performance, design, comfort and features; vehicle quality and reliability (26%); ownership costs (22%), including fuel consumption, insurance and costs of service/repair; and dealer service satisfaction (20%).

Overall satisfaction among vehicle owners in Germany has declined to an average of 807 (on a 1,000-point scale) in 2011, compared with 813 in 2010. Only the ownership costs factor has improved from 2010, with a modest increase of three points. A nine-point decline in the vehicle quality and reliability factor is primarily due to a notable increase in reported problems. In 2011, the rate of reported problems has increased by 12 problems per 100 vehicles (PP100) from 2010, mostly in the areas of vehicle exterior and heating, ventilation and air conditioning.

“The decline in vehicle quality and reliability, coupled with the decline in vehicle appeal, is an important reminder to manufacturers that the product is a critical driver of ownership satisfaction and will remain a key differentiator among brands in the increasingly competitive automotive market in Germany,” said Brian Walters, senior director of European automotive operations at J.D. Power and Associates. “The auto market in Germany may be 125 years old, but owners in Germany still require specific performance levels and reward the brands that deliver it.”

The study finds that vehicle owners who say they are “delighted” with the dealer service experience are nearly two-and-one-half times as likely to return to the servicing dealership for paid service work, compared with less-satisfied customers. However, there is a wide variance in service levels delivered by various brands. The study identifies five specific actions that elevate satisfaction, referred to as key performance indicators (KPIs), and finds that only three of the 12 mass market European automakers included in the study consistently perform at least four of the five KPIs. Missing three or more KPIs has a particularly negative impact on overall satisfaction and retention rates. Among premium brands, missing three or more KPIs results in a 13 percent decline in expected future visits to the same dealer.

According to Walters, consistently integrating all five KPIs into every service visit is essential to delighting service customers and helping ensure they return to authorized dealers for service.

The 2011 Germany Vehicle Ownership Satisfaction Study is based on evaluations of more than 17,150 online interviews with German car owners after an average of two years of ownership. The study was fielded from January to March 2011.

The annual J.D. Power and Associates study provides consumers with reliable and accurate information about many vehicle models, and helps manufacturers provide high levels of satisfaction to their customers. More comprehensive study results are published exclusively in AUTO TEST, which will be on sale Friday, June 17, 2011.

About The McGraw-Hill Companies
Founded in 1888, The McGraw-Hill Companies is a leading global financial information and education company that helps professionals and students succeed in the Knowledge Economy.  With leading brands including Standard & Poor’s, McGraw-Hill Education, Platts energy information services and J.D. Power and Associates, the Corporation has approximately 21,000 employees with more than 280 offices in 40 countries.  Sales in 2010 were $6.2 billion.  Additional information is available at http://www.mcgraw-hill.com.

About AUTO TEST
AUTO TEST is a member of the international AUTO BILD group published by Axel Springer. Since 2003, AUTO TEST has been the leading special interest magazine for readers who are planning to buy a new car. More than 500 cars are tested each year, with more than 1.8 million kilometers driven to provide readers with detailed and objective model reviews to help them choose the best car for their money. Readers can also find tips on cutting running costs, used cars, service, finance and accessories.

No advertising or other promotional use can be made of the information in this release without the express prior written consent of J.D. Power and Associates. www.jdpower.com/corporate 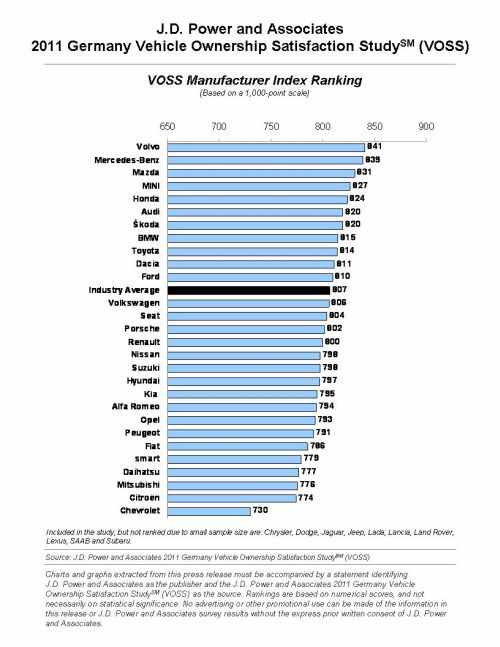