The EAST DOC PLATFORM, the largest event for documentary professionals in Central and Eastern Europe, takes place March 3-9, 2018. During the week-long event, Prague will host leading documentary professionals, distributors, TV and festival selectors from around the world. Filmmakers will pitch their documentary projects and compete for several prizes in the total amount of EUR 35,000. General audiences can attend
a number of interesting talks by international professionals. Most events take place at the Cervantes Institute, entrance to talks is free. 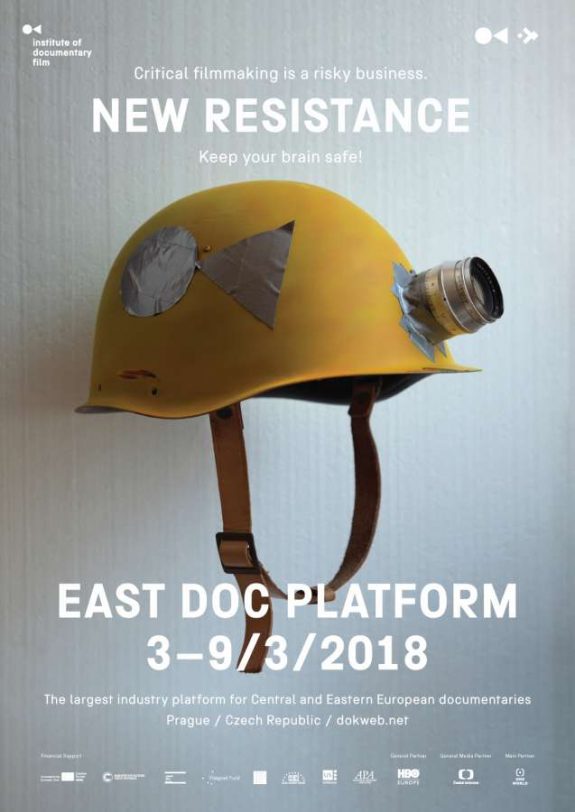 The theme of the 7th EDP “New Resistance” addresses the rise of nationalism in the region of Central and Eastern Europe. “We hear more and more political voices today calling for the restriction of critical free press. Public media and free speech have come under attack, documentary filmmakers and journalists have been facing threats of censorship even in the Czech Republic. Countries in the former Eastern bloc share a common history with regard to these issues. It is time to reopen the subject and find some lessons for the present,” explains Tereza Šimíková, EDP Manager. What impact do these tendencies have on the life of documentary filmmakers? Is their stubborn unwillingness to turn a blind eye to current issues more important today than ever before? Get answers to these and other questions at a panel discussion with the invited guests: Max Tuula (The Trial: The State of Russia vs Oleg Sentsov), Filip Remunda (Czech Journal), Konrad Szołajski (The Battle with Satan)
or Outriders, a platform for independent Polish journalism. The discussion will be hosted by Czech journalist Veronika Sedláčková and it will be translated into Czech. It takes place on Tuesday, March 6 at 4 p.m., Kino 35, French Institute in Prague.

This year’s EDP has a slate of inspiring talks for visitors. On Wednesday, March 7 at 5 p.m., we are proud to introduce Kim Longinotto, one of the most popular documentary filmmakers whose previous films include the Cannes IFF winner Sisters in Law and Rough Aunties, awarded at Sundance. Liz Rosenthal, a curator of the world’s first festival VR competition that takes place as part of the Venice Biennale, will deliver a talk entitled “How to Bring VR Projects to Life”. It takes place on Monday, March 5 at 6 p.m., Cervantes Institute.

Another attractive panel discussion will be dedicated to new funding opportunities. The traditional model of international collaboration with TV networks is in troubles due to cuts in co-production funding, and so the East Doc Platform has decided to invite an entirely new type of partners – international fund representatives and investors connecting film and private equity. For the first time in Prague, we have the pleasure of hosting representatives of Chicken & Egg Pictures, a US fund that supports women nonfiction filmmakers, Whicker’s World Foundation and the Tribeca Film Institute that in partnership with the EDP organizes a brand new short film pitch competition this year. The panel discussion takes place on Wednesday, March 7, at 3 p.m.

Filmmakers who will pitch their documentary projects at the East Doc Platform will compete for one of several awards designed to aid further film development. Czech audiences will surely appreciate the fact that nearly one in three selected projects has a Czech director or (co-)producer. These and other projects will be carefully assessed by international festival selectors, including Martijn te Pas, Senior programmer at IDFA, who will be looking to find the best films in the region and set them on a successful path. An international jury consisting of Serge Gordey, Esther van Messel, Rada Šešić, Lejla Dedić and Lars Säfstrom will present the best project in development and production with the East Doc Platform Award that comes with EUR 7,500. Czech TV, EDP’s general media partner, will announce the Czech TV Co-production Award that comes with EUR 5,700. The best short project will receive USD 20,000, year-long mentoring service and distribution support from the Tribeca Film Institute. In addition, all projects selected for the 2018 East Doc Platform will compete for the HBO Europe Award and EUR 2,000 for project development. Current Time TV will support a selected filmmaker with EUR 1,500.

East Doc Platform will also hold the official opening of the fourth edition of the project KineDok, focused on alternative distribution of creative documentaries. It will start fashionably with a screening of Polish film Communion (Anna Zamecka, 2017), awarded the best European Documentary Award. The screening will be followed by Q&A with filmmakers and party.

The Institute of Documentary Film (IDF) has been supporting creative documentary films from Central and Eastern Europe since 2001. IDF provides both emerging and experienced filmmakers with training, financing, networking and pitching opportunities, helps them get international attention and co-productions, rewards the exceptional projects with Awards and further opportunities and improves their orientation on the international market. To the audience of documentary enthusiasts, IDF also brings a rich programme of lectures, presentations and screenings in their home regions or during IDF’s industry events.

About the East Doc Platform

The East Doc Platform (EDP) is the largest co-production, funding and distribution platform tailor-made for Central and East European documentaries. Every year, connecting 120 East European filmmakers to more than 100 key decision makers – producers, broadcasters, distributors and festival programmers from around the world.