It was in Timişoara that a week of protests led to the downfall of Ceauşescu. Twenty years on, this bright, culturally eclectic city proves there’s more to urban Romania than brutal tower blocks.

A temporary installation commemorates the anniversary of the revolution that deposed Nicolae Ceauşescu.

It’s fair to say that urban Romania has had its struggles as a tourist sell. Travellers to the country are usually drawn by either the expanse of the countryside – still seen as existing in a rolling horse-and-cart realm that western Europe left behind long ago – or the vampire legends (the Drac-allure?) of Transylvania. Its cities, on the other hand, are generally treated as bywords for gloom, grey skies and brutal tower-blocks. 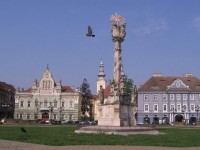 s to the likes of Timişoara to counter preconceptions. Alongside Cluj-Napoca, Sibiu and the much-maligned capital Bucharest, the western city is among those Romanian centres to lay genuine claim to a bright and eclectic cultural offering. Its theatres, festivals and live music calendar give impressive platform to the national character, and in several parts of town (don’t be alarmed, now) there’s pretty scenery, too.

Last month, the city found headlines for other reasons. Twenty years ago, mass protests here jumpstarted the week-long revolution that deposed Nicolae Ceauşescu. The days running up to Christmas 1989 shaped an era, bloodily so, and you won’t have to look far for someone keen to give you their own account of the period. Two decades on, however, this university town is as notable for its burgeoning arts scene and bold, age-worn architecture as for its political past. There’s a youthful spring in its stride, too, evident in everything from a high-energy festival roster to a lively CouchSurfing community.

Today’s marketing tag is „Little Vienna„, and there’s a wealth of genuinely grand Habsburg buildings, but the city’s too much of a rough diamond for the comparison to be apt. This is not necessarily a bad thing. The handsome, cracked grandeur of the centre makes for a stirring backdrop, tourist traps are almost non-existent and costs are low. From a cultural viewpoint, meanwhile, omnipresent theatre bills and a trio of weekly listings magazines tell their own story.