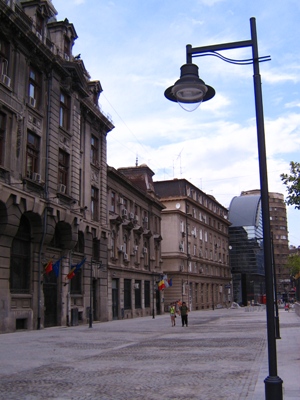 About three years ago, Bucharest experienced a revolution that was entirely ignored by the international community. Granted, the coup was not as dramatic as Romania’s 1989 revolution, in which Nicolae Ceausescu, the Communist dictator who had brutally mismanaged this Black Sea nation for more than two decades, was deposed and executed. Nor was it as momentous as when the country joined the European Union in 2007, along with Bulgaria, its neighbor to the south.

So subtle was the transformation, in fact, that most Bucharestians probably didn’t quite realize what was going on.

Here’s what happened: All around the capital, with no formal organization whatsoever, bar and restaurant owners grabbed their chairs and tables, carried them outside and … put them down gently, creating terraces and sidewalk cafes. No longer would patrons be confined to electric-lighted interiors! Now they could eat stuffed cabbage rolls and polenta in the fresh air, shaded from the sun by umbrellas advertising Ciuc beer!

Open-air terraces may not sound like much, but according to my Bucharest-born friend Horia Diaconescu, a keen observer of the city in which he’s spent his 29 years, they represent a sea change. Under Communism, he explained, public life was restricted — people simply did not go out to meet friends (or strangers) in bars and cafes. They socialized in private homes, or not at all. Now, however, “terasas” had become de rigueur, and streets like the cobblestoned Strada Smardan, in the heart of old Bucharest, are filled on summer nights with Romanians enjoying the cool breeze and each other’s company. Viva la revolución!