JOURNEYS: THE SPIRIT OF DISCOVERY

„LIKE a giant exotic insect, a large glass clings to the side of an apartment building in the Piata Romana, multicoloured straws emerging from it like tentacles.

From above, an oversized Coke bottle, lying along the building’s roof, pours a murky stream of fake beverage.

This, we take it, is the face of the new Bucharest. As we trundle around its streets in our rented Ford Fiesta — amid garish billboards for Vodafone, L’Oreal and the like plastered on Parisian and neo-Romanesque facades — this face seems increasingly like that of an adolescent trying on make-up for the first time. 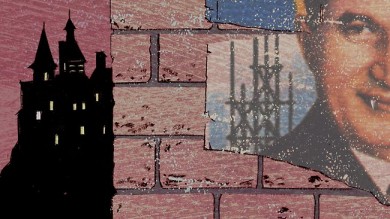 Seeking refuge we head to the Romanian Athaeneum, which sits like a wedding cake in the centre of Bucharest, its white columns defiantly billboard-free. In one of the concert halls, a small crowd has gathered to hear a Polish pianist play Chopin. Despite his stirring arpeggio-filled mazurkas and his lyrical rendering of nocturnes, each piece is followed by an awkward silence. It’s as if the audience is still making up its mind whether or not to applaud.

Most Romanians we speak to seem to exhibit a similar ambivalence about the direction in which their country is headed. Aboard the flight from Paris to Bucharest, we meet Nikolae, a former ship’s master with piercing bluish-grey eyes, who laments the fact Romanian youth of today don’t know or care as much about history as his generation did. On the backs of our boarding passes he scribbles the word tuica, the name of Romania’s traditional plum brandy, key conversational phrases and details of his villa by the Black Sea to which he warmly invites us.

Another afternoon, at a food stall, we strike up a conversation with Ileana after she helps us navigate the intricacies of a Romanian menu.

She joins us for lunch at a picnic table across the road from the ironically titled People’s Palace. I say ironic because 30,000 of the people’s homes were bulldozed by the dictator Nicolae Ceausescu in his rush to erect this austere behemoth, the world’s second-largest building.

When asked if things were better now than under his rule, Ileana shrugs: „Well, you know, you can’t have it all.”

We gnaw contemplatively on our roasted pork and green capsicum kebabs, an impatient breeze tugging at the paper napkins pinned down with slices of bread.

Ileana explains she is glad that Romania’s EU membership gives her the freedom to travel throughout the continent but she’s not so thrilled about the increasing rates of unemployment and crime.”